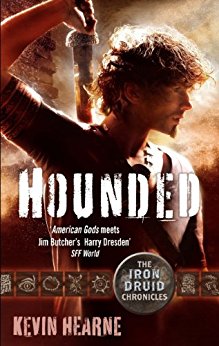 I’ve been reading the Iron Druid series (I’ve got to Shattered) and, while it’s a very good action series, lots of fights, lots of interest…I’m finding it a bit meh.

I loved the first one, and quickly picked up the second. But as I’ve continued reading, I’ve kinda lost interest. I’m reading this current one because it happened to be in the library, and I hoped the series might pick up, so…we’ll see? But I was pondering why I was finding it quite so meh. And I think it’s to do with the character levelling.

With the Dresden Files, one of the big pluses – and the thing I love – is the variety of enemies Dresden faces. There’s a whole different range of problems over the books, and as he goes, he’s learning – he’s picking up new tools, new powers, new skills. He’s adding allies, sure, but Dresden is changing too. And that shows; he’s able to fight bigger enemies, and over the series, he’s levelling up.

Iron Druid doesn’t really have that. Atticus enters the series with everything already in his toolbox; he’s already a Druid with a lot of knowledge, he’s already got his tattoos, he’s already got all the spells. He’s got the allies and the power. Sure, he picks up a few new people on the way, and they occasionally level up, but…nothing really changes. And that goes for the enemies, too; the different books are simply a different enemy, and it’s probably another God. The fight level isn’t changing – or if it is, it’s his enemies ganging up. Where Dresden could have been struggling to fight a zombie in Book 1 and happily whomping twenty of them by Book 14, Atticus is the same power level; zombies are zombies even 5 books in.

I was thinking about it in the context of the detective novels I’ve been reading, too – Agatha Christie and Dorothy L Sayers. They don’t level up, either; the characters come into the series with their skills and tools ready, and they don’t gain more. When you open a Poirot book, you know there’s going to be comments about Little Grey Cells: that’s the tool. But the challenge in the murder mysteries is the murder mystery – it’s the puzzle, it’s how it was done. The detective almost doesn’t matter – you could replace Sherlock with Poirot, and it would really come down to your moustache preference. But it’s the mystery that is the key to the interest in those books.

So I think I’m feeling dissatisfied with the Iron Druid ones because it doesn’t have either a protagonist arc or a plot arc…I mean, there are some there (things happen to him, sure) but it doesn’t really make a difference. He’s going to win the fights. He’s just going to have another set of Gods to face. It all feels samey…which is a good thing, sort of, but…you still need the difference.

Anyway. Some rambling thoughts on what I’m currently reading!