The Hands of the Emperor by Victoria Goddard 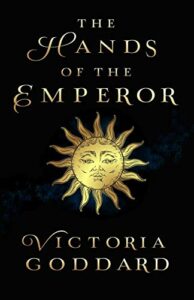 An impulsive word can start a war.
A timely word can stop one.
A simple act of friendship can change the course of history.

One day Cliopher invites the Sun-on-Earth home to the proverbially remote Vangavaye-ve for a holiday.

The mere invitation could have seen Cliopher executed for blasphemy.
The acceptance upends the world.

Where do I even start with this?

IF YOU LOVE THE GOBLIN EMPEROR AND NEED MORE POLITICS/ROMANCE/TANGLED INTRICACIES/COURT MANNERS IN YOUR LIFE, GET THIS BOOK.

This is also highly recommended for anyone who liked The Curse of Chalion or A Memory Called Empire, or wished GRRM’s stories were a bit less sprawling and murderous and just a bit nicer.

On the surface, this is a story about a Chancellor putting his head on the line to suggest that his Emperor, the Radiant and Illustrious One, might like to take a holiday.

(The Emperor does not Do holidays. Or emotions, really. Or anything beyond huge works of magic, overseeing court functions and occasionally wrangling committees.)

And the Emperor says yes.

The slight issue with this, of course, is they then have to navigate how that all works, when you’ve got a bunch of rituals (and some small issues like; if the Emperor touches anyone, it could mean death) and strictures and prohibitions and courtly ceremonies and… he just wants to go snorkelling?

This is a story about an Emperor going on holiday, and the friendships that come from that; and how those friendships change both the people involved, and change the world.

In short; it’s a book that I have read and re-read, alongside The Goblin Emperor. It’s absolutely huge (969 pages in print!) but also keeps the story very tightly told; it’s just long, rather than being complicated, and it never feels boring or slow. It’s about people, and it’s so sweet and good while also taking you on a rollercoaster of emotions – and all over the Empire in terms of cultural expectations! There are a wonderful set of characters, from the main quartet around the Emperor to Cliopher’s (very large) family, to the Princes and politicians, to the scholars, to those lost and gone but not forgotten. It’s a beautifully-told story, and is absolutely on my favourites list.

There is also a sequel – The Return of Fitzroy Angursell – and it’s a wonderful sequel; I bought it straight after finishing Hands and plunged straight in, and it’s both a wonderful change of pace and an excellent continuation (plus I did almost scream when I figured the name out, and then had to go and re-read Hands with new knowledge in mind!) It is shorter, but there are more stories about the characters; The Bride of the Blue Wind follows Pali, and Stargazy Pie is set in the same universe.