We’ve had Bobble a year! He’s another year older (17!!), another year grumpier, and a bit fatter (thank goodness, because he was pretty skinny when he arrived!)

We got him from Oxford Cats Protection just before the first lockdown hit, and I’m so glad we did – he’s had a lovely year (fuss, snoozes, biscuits, more fuss) and it’s been wonderful to have a cat around. It’s been pretty much the perfect year too – he’s had undivided attention!

He yells me out of bed at 6.30 every morning, and complains bitterly until I have a) filled his biscuit bowl, and then b) sat on the sofa – food and cuddles in the morning are his routine! It’s been lovely to have that, even if I do feel bad for kicking him off on the mornings that I have to go to work.

He has adapted to laps – very happily, considering the amount of time I spend balancing my laptop on a sofa arm or back because he’s occupying my lap and having a snooze – and has got the World Sorted Out, or at least his bits of it: anything that arrives must be sniffed, all visitors must be vetted, and otherwise as long as he’s got naps and cuddles and biscuits then not a single fuck is given.

He loves cuddles – I get morning cuddles (he demands them) and my partner does evening cuddles, and he swaps during the daytime depending on who’s either available or can be yelled into giving him attention. He’s got a gorgeous rumbling purr, and he also does adorable little gnaaaaark snores through his wheezy nose when he dreams. It’s very cute.

He is Unimpressed by everything, wants to know everything we’re doing, does twice-daily patrols of the house, occasionally runs around madly (but then of course needs a nap afterwards) and enjoys singing in the bathroom. We have started joking about the pervading sound of WOE that fills the house, because there is WOE and WOE IS ME and WOE I HAVE NO BISCUITS and MORE WOE and ALSO WE HAVE NOT HAD ENOUGH WOE.

Also his ears go down when he meows which is actually the cutest thing ever. We have also started having conversations, which usually go along the lines of;

Imagine the meows getting progressively more aggrieved and you’ll have a taste of the tone. I’m actually quite glad I don’t really understand Cat, as I’m sure I’m getting called some lovely names for my refusal to fill his biscuit bowl. (Which is mysteriously, somehow, always empty. Thirty seconds after it was filled – empty! It’s absolutely disgraceful, and I don’t know how a cat is meant to cope with this treatment.) 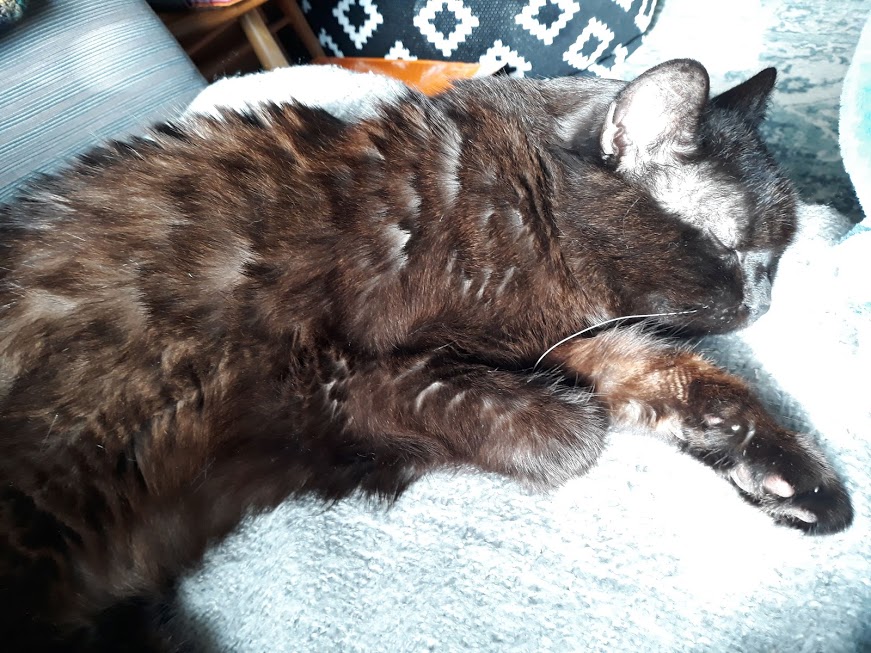 So, in short; we have had a year with a seventeen-going-on-seventy grumpy, adorable and biscuit-desperate old cat, with a chin that eternally disapproves and a purr that’s always ready to come out, especially when he’s getting cuddles. He likes sleeping, fuss, biscuits, naps, yelling at the crows, more naps, cuddles, biscuits, yelling at his humans, checking out what everyone’s doing, naps, doing yoga, cuddles, biscuits, and naps. Also did we mention the biscuits?