It’s a bundle of cuteness and romance this time, with a battle or two mixed in… cute sci-fi, here we come! 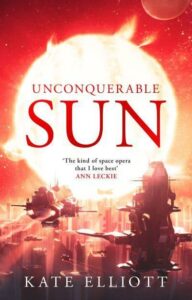 It has been eight centuries since the beacon system failed, sundering the heavens. Rising from the ashes of the collapse, cultures have fought, system-by-system, for control of the few remaining beacons. The Republic of Chaonia is one such polity. Surrounded by the Yele League and the vast Phene Empire, they have had to fight for their existence. After decades of conflict, Queen-Marshal Eirene has brought the Yele to heel. Now it is time to deal with the Empire. Princess Sun, daughter and heir, has come of age.

In her first command, she drove a Phene garrison from the beacons of Na Iri – an impressive feat. But growing up in the shadow of her mother – a ruler both revered and feared – has been no easy task. While Sun may imagine that her victorious command will bring further opportunity to prove herself, it will in fact place her on the wrong side of court politics. There are those who would like to see Sun removed as heir, or better yet, dead. To survive, the princess must rely on her wits and companions: her biggest rival, her secret lover, and a dangerous prisoner of war.

I was a bit worried that this would be hardcore sci-fi, but it’s not; there are battles, but it’s very focused on the characters, and the relationships between everyone. The main core is Sun, along with her companions – I really loved how the relationships (both old, from her long-time companions, and new from ones introduced to the mix) changed and developed. I also really enjoyed the political fights, and the way that the choices and decisions influenced everyone else – and how Sun’s own choices made her character develop. It’s a really well-paced, well-written book with lots of interesting (and cute!) characters, and I’ve got the second (Furious Heaven) on my wish-list! 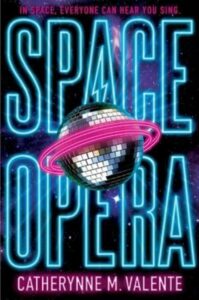 Once every cycle, the great galactic civilizations gather for the Metagalactic Grand Prix–part gladiatorial contest, part beauty pageant, part concert extravaganza, and part continuation of the wars of the past. Species far and wide compete in feats of song, dance and/or whatever facsimile of these can be performed by various creatures who may or may not possess, in the traditional sense, feet, mouths, larynxes, or faces. And if a new species should wish to be counted among the high and the mighty, if a new planet has produced some savage group of animals, machines, or algae that claim to be, against all odds, sentient? Well, then they will have to compete. And if they fail? Sudden extermination for their entire species.

This year, though, humankind has discovered the enormous universe. And while they expected to discover a grand drama of diplomacy, gunships, wormholes, and stoic councils of aliens, they have instead found glitter, lipstick, and electric guitars. Mankind will not get to fight for its destiny–they must sing.

Decibel Jones and the Absolute Zeroes have been chosen to represent their planet on the greatest stage in the galaxy. And the fate of Earth lies in their ability to rock.

Hum. Ok, I have to admit I didn’t get on with this. It is very HitchHikers, and is very good – and if you’re into that style of writing (quite jerky, but also very weird, in an amusing way) then I’m sure it’s great. But it’s not my sort of thing. I did read (well, skimmed) all the way through and if you like the first chapter, then I’d say it’s worth the read.

The Seven Brides-to-be of Generalissimo Vlad by Victoria Goddard 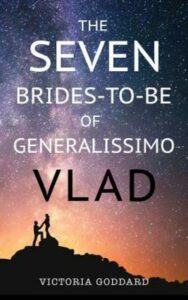 A promise is a promise… Portia MacArthur is possibly the best courier in the galaxy. Severely scarred from a training accident, she prefers the solitude of space to social interactions, especially ones involving her family. Vlad Millington, new Generalissimo of the Kinrod Syndicate, is a noted rake of galactic fame about to choose his bride. When Portia and Vlad were ten, she promised him she would be there on the day of his betrothal with a fleet of spaceships. Nothing-not social disgust, not her brother’s idiocy, not a mysterious interstellar predator, not even the black hole in the centre of the galaxy-will stop her from keeping that promise. She just hopes Vlad’s still worth it.

A short novella by my current favourite author (The Hands of the Emperor! SQUEEEE) but a standalone from any of the other series. A lovely short read, and a sweet story – I really like Portia’s solution to the spaceships! I do agree with another reviewer, though, that it would have been really good to see more of the other brides; what is their background? Why are they there? And what happens next?

Sisters of the Vast Black by Lina Rather 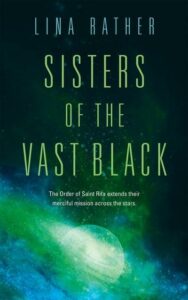 Years ago, Old Earth sent forth sisters and brothers into the vast dark of the prodigal colonies armed only with crucifixes and iron faith. Now, the sisters of the Order of Saint Rita are on an interstellar mission of mercy aboard Our Lady of Impossible Constellations, a living, breathing ship which seems determined to develop a will of its own. When the order receives a distress call from a newly-formed colony, the sisters discover that the bodies and souls in their care – and that of the galactic diaspora – are in danger. And not from void beyond, but from the nascent Central Governance and the Church itself.

A short-novel or long-novella (the next one, Sisters of the Forsaken Stars, is out in Feb 2022) which focuses on the slightly motley crew of nuns who travel the stars to bring faith and healing to colonies. The focus is very much on the trials and decisions that they make, and the faith behind it; and how faith might warp and change out in the void, or how a central authority might try to control it. It’s a good read, and the characters – and their choices – are all interesting; I’m not sure if the next one is on my TBR, but this one is worth a read if you’re into the slightly more philosophical-concept sci-fi – and living ships. 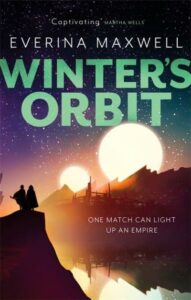 The Iskat Empire rules its vassal planets through a system of treaties – so when Prince Taam, key figure in a political alliance, is killed, a replacement must be found. His widower, Jainan, is rushed into an arranged marriage with the disreputable aristocrat Kiem, in a bid to keep rising hostilities between two worlds under control. But Prince Taam’s death may not have been an accident, and when Jainan himself is a suspect, he and Kiem must navigate the perils of the Iskat court, solve a murder, and prevent an interplanetary war . . .

Well, this is frankly adorable. The sci-fi setting is a good backdrop for the political scenery that makes this relationship so good and interesting, and the tensions – and interweaving problem/solutions – between Jainan and Kiem are wonderful. The characters themselves are brilliant; both complex and flawed, and both bouncing off each other in a series of misunderstandings/understandings/tropes that work perfectly. I absolutely loved this, and it’s a very sweet story. It also looks like there might be a further two (!!) in the series, which would be fabulous!