In this update: cosmic foxes, roses, horrible cthulu-type monsters, kites (the bird type), a farty cat, cakes, donuts and witches. These may or may not be related to each other. 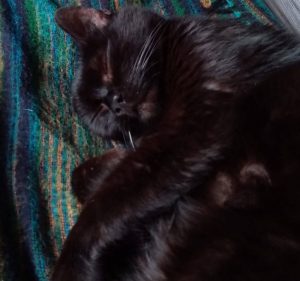 Bobble is sleeping, farting and ordering everyone around with happy abandon. He spent six hours on Friday asleep either on my lap or next to me, so he is one spoiled cat, and is obviously demanding cuddles at every opportunity. He is also a pile of paws and will reluctantly let us touch his toe-beans, is ridiculously fast (I may have a few small scars from trying to play with him) and has the most adorable little snore.

Then on to the second important thing: you need book recommendations, you say? I know I’m biased, but maybe try Beneath The Rising, Weave the Lightning or The Human Son? Also, we’ve got audiobooks coming out! I’d also thoroughly suggest pre-ordering Shadow in the Empire of Light, The Chimera Code and The House of Styx. Wouldn’t want to run out of books, eh? (We have so many good books at work and I just want to yell about all of them… so be thankful you’ve only had a selection!)

Also in work news, I’m reading exciting things that I can’t talk about yet…. WHEEEEEE!

I got sent a late birthday present by a wonderful friend of a voucher for roses. I have spent several hours leafing through (no pun intended) the catalogue going “SO PRETTY” and “climbers? Or a bush? What sort of soil do we have again? We’re mostly shade, so…” It’s been a lot of fun and I still haven’t decided. We think an in-person trip to the centre might be needed!

The kites have been keeeeee-kee-kee-kee from the tree behind the house; there’s two of them floating over most mornings now. They had a bit of a tough time with all the wind last week (well, I say that, but it wasn’t like they were having to flap… it was just the “getting to where they wanted to go” bit that seemed to be giving them issues) but the current sunshine is doing wonders for the thermals, and they’ve just been drifting over on the hunt for kite-sized snacks. 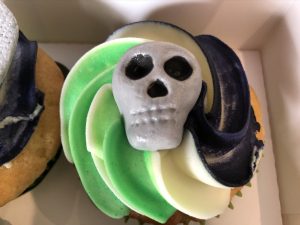 If anyone’s in Oxford, Jericho Coffee on Osney Estate have started doing coffee & donuts on Saturday mornings… and Patron Oxford are also delivering said donuts (and brownies!) to the city! (I think this is incredibly dangerous and haven’t ordered any, because they are FANTASTIC. Once a week is dangerous enough!) And if you’re not in Oxford, they do postal coffee beans. The smell coming out of the roastery is always fantastic, so I would recommend based on that alone!

Also on a cake note, I ordered some amazing cupcakes from Happy Cakes last month (ok, no wait, May…) for one of my authors who was having a crap week – obviously skulls and gravestones helped. (They are relevant, honestly, and they did help cheer her up!) 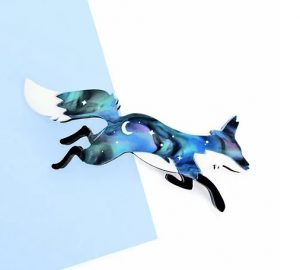 On a pretty-things note, Lynsey Luu does amazing quirky stuff and I am still trying to decide what I want to buy! I’m somewhere between a cosmic fox, the cutest otter ever, or EVERYTHING ELSE. Currently I’m defaulting to the latter. The flower pendants are beautiful, too! Sigh.

I am currently on an Agatha-Christie kick, because it seems to be what my brain needs. Having Miss Marple sweetly pronounce that the world is horrible and evil and it just reminds her of so-and-so the butcher’s son who came to a bad end… it seems to fit the current world, somehow. Incidentally, if you like Agatha Christie, try Sexton Blake – we’re publishing collections of the best stories, and they’re the same sort of mystery and derring-do: Sherlock Holmes mixed with Poirot and Indiana Jones. I’ve been thoroughly enjoying them!

I am sort-of writing again! I was leafing through PetiteCreme‘s sketchbook (with her permission!) and spotted a witch on a bridge… and it reminded me of Necromancer’s Charm. So I hauled it out, and – SO. MANY. NOTES. I mean, I wrote three versions of the start because I couldn’t get the voice, and two documents of other notes because Thief & Seer is sort-of related and…. ARGH. But I really enjoyed reading the start again, which felt good! I’m sending it over to Otter for them to read, as they’re my current “is this any good?!” reader, and then… well, we’ll see if anything comes back?

In general Kate news: I’m on my third week into changing medication, and it’s… not really fun. I had one week of complete exhaustion as one withdrew, and then a week of complete ups and downs as the new one kicked in, and I’m currently in the fine-for-three-days-crash-for-a-day cycle that’s still underlaid by grey. I’m just trying to do as much as I can while manic, and then take the crashes as they come, and trying to ignore the weasels. Animal Crossing and re-reading books are getting me through, plus Bobble cuddles and chocolate. I know I’m in the best position possible to be going through all of this, and I’m just trying to keep stepping forward. If anyone spots the shops getting restocked with new brains, though, let me know. I might be in the market for one.

Also!  In happier news, if anyone’s near Fairford in the Cotswolds, or can get there, the 7a Coffee Shop do SERIOUSLY GOOD BROWNIES. Sam dropped some off for me and oh my goodness. SO GOOD. Collection only, but so worth it.

…I feel like I am fixated on food and books at the moment, which… is fair, I think.

And on a final food – and cat – note, I have been watching Jun’s Kitchen: the most adorable cats, and really nice-looking food!