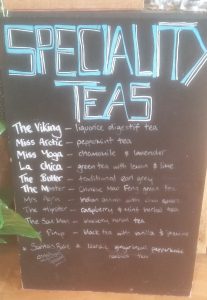 I’ve had a pile of editing work, so I’ve been trundling onwards through that. Then I’ve got proofreading and some formatting to finish, and then just the rest of my list, really. It’s all ongoing, and nothing particularly special – I’m still enjoying it all, but it’s all become routine (which is nice in some ways!) The pile’s not really leaving any time for writing, but then I don’t really have any stories in me at the moment. I’ve got some ideas – I mean, check out the list of teas from the Nordic Cafe in Lymington (which, by the way, is excellent): I just want to write all those characters! But nothing’s really flowing, or fitting itself into a story. I’m just uninspired.

In the rest of life, it’s sort of ongoing as well. I’m waiting to hear back on a job I’d love to get, but I’m trying not to get my hopes up; I’ve had some friend drama, but I’m so tired of it that I just stepped away rather than try to fix anything. I’m still playing games on a Tuesday night, still trying to walk every day. I’ve been reading a bit, but it’s either old favourites (Martha Wells’ All Systems Red) or I’m halfway through new ones (The Carpet Makers by Andreas Eschbach and The City of Woven Streets by Emma Itäranta). So nothing particularly new there. 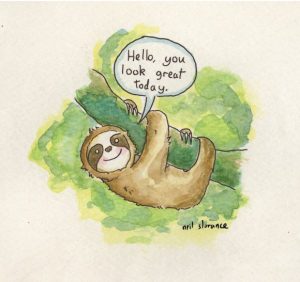 There has been some good. I had a wonderful present through from my friend Pasty & Purls, which was brilliant and I’m currently halfway through framing – isn’t it CUTE? That was definitely a highlight in my week, as was Disney films with a friend – he hadn’t seen The Emperor’s New Groove. JUST WHAT. So we watched that. And I got to go out on a powerboat over the weekend in brilliant sunshine and a flat sea, which was fun (if cold!)

But beyond that…I don’t know. I don’t think it’s depression – or at least, it’s mild. It’s just grey. But I’m doing ok, just trundling along; just one step at a time and one thing at a time, every day.