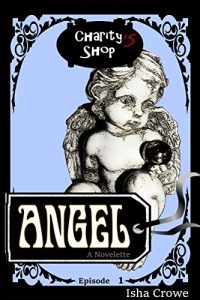 Charity has just celebrated her fiftieth birthday by bawling into her cake. Her life is in shatters. After her husband went in search of himself, she and her teenage son were left homeless and penniless and had to move into the guest bedroom of Charity’s parents in the small Welsh town of Llerhyfedd.

Things take a turn, not necessarily for the better, when she finds a job in Llerhyfedd’s only charity shop, where the stock is spooky, the customers peculiar, and where ‘being charitable’ takes on a mystical new meaning.

This is the first in a projected series, and is a novelette – and it’s an odd, intriguing and warm-hearted tale about Charity’s first customers. The setting’s reality with some twists, and I’m interested to see what the next story is!

The Tea Master & The Detective by Aliette de Bodard 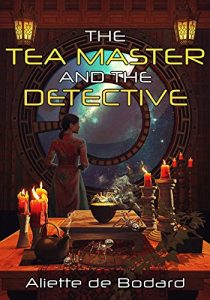 Once, the mindship known as The Shadow’s Child was a military transport. Once, she leapt effortlessly between stars and planets, carrying troops and crew for a war that tore the Empire apart. Until an ambush killed her crew and left her wounded and broken.

Now the war is over, and The Shadow’s Child, surviving against all odds, has run away. Discharged and struggling to make a living, she has no plans to go back into space. Until the abrasive and arrogant scholar Long Chau comes to see her. Long Chau wants to retrieve a corpse for her scientific studies: a simple enough, well-paid assignment.

But when the corpse they find turns out to have been murdered, the simple assignment becomes a vast and tangled investigation, inexorably leading back to the past–and, once again, to that unbearable void where The Shadow’s Child almost lost both sanity and life…

A cross between Anne McCaffrey’s liveships and Inspector Morse with a sci-fi twist! I love the worldbuilding for this; tea brews are needed to tweak the reactions of those undertaking deep-space journeys, and that means a discharged ship can brew them…at least until a random and fairly abrasive visitor gives her a challenge, and then a mystery. I really liked the hints of the wider world, the politics woven through, and the way the plot turns unexpectedly. It’s a novella and I’m really interested to see what the others in the same universe are; even if it’s not the same characters, I’m looking forward to reading them! And if they are the same characters, I really want to see how the relationships develop… 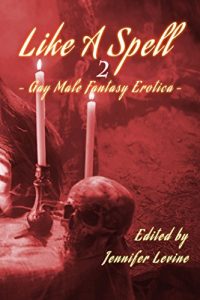 For the fire anthology, we’ve focused on stories portraying the love between men and masculine characters. Fire equals passion and heat, the all-encompassing flames of male desire. Think of the fire gods Ra and Vulcan, Agni and Xiuhtecuhtli, embodying strength, ferocity, and power.

My favourite – and the story that made me pick up the anthology, having seen a snippet in an email – was “The Best Part of Power”; it’s a story about two academics who try studying a spell, mess up, and end up as….slightly more than colleagues, shall we say? It’s adorably geeky and very cute, as well as sexy.  “Fervidus” was my second favourite, just for the grumpiness of the main character: I adored the developing relationship as much as the story itself!

I enjoyed “Passage, Performance, Passion” which follows a wizard recruiting a mortal to take part in a sex ritual – with probably predictable results! “Here Be Dragons” is a cute and awkward story about a birthday party…”The Prince’s Mage” takes a slightly darker turn on the needing-someone trope, and “The Blood of the Mage” is an interesting turnabout of an orphan boy turned magician.

The stories are all different, and all very good – and I’m looking forward to picking up the other three books in the collection when they get to the top of my reading pile! 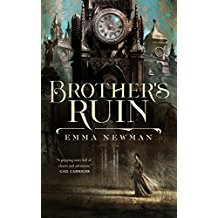 The year is 1850 and Great Britain is flourishing, thanks to the Royal Society of the Esoteric Arts. When a new mage is discovered, Royal Society elites descend like buzzards to snatch up a new apprentice. Talented mages are bought from their families at a tremendous price, while weak mages are snapped up for a pittance. For a lower middle class family like the Gunns, the loss of a son can be disastrous, so when seemingly magical incidents begin cropping up at home, they fear for their Ben’s life and their own livelihoods.

But Benjamin Gunn isn’t a talented mage. His sister Charlotte is, and to prevent her brother from being imprisoned for false reporting she combines her powers with his to make him seem a better prospect.

When she discovers a nefarious plot by the sinister Doctor Ledbetter, Charlotte must use all her cunning and guile to protect her family, her secret and her city.

*flaps hands* just…it’s amazing and tense and awesome characters and magic + industrial and it’s a novella so you can read it super quick and there’s a second one. I had to read it in bits because I got really invested and anxious! Plus it’s got a whole load of subtle tweaks that mean it’s steampunk but not (it’s technically gaslamp fantasy) so it’s nice to read a slightly different world.

And it’s by Emma Newman so it’s fabulous.