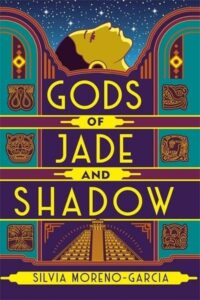 The Jazz Age is in full swing, but it’s passing Casiopea Tun by. She’s too busy scrubbing floors in her wealthy grandfather’s house to do anything more than dream of a life far from her dusty, small town in southern Mexico. A life she could call her own.

This dream is impossible, distant as the stars – until the day Casiopea opens a curious chest in her grandfather’s room and accidentally frees an ancient Mayan god of death. He offers her a deal: if Casiopea helps him recover his throne from his treacherous brother, he will grant her whatever she desires. Success will make her every dream come true, but failure will see her lost, for ever.

In the company of the strangely alluring god and armed only with her wits, Casiopea begins an adventure that will take her on a cross-country odyssey, from the jungles of Yucatán to the bright lights of Mexico City and deep into the darkness of Xibalba, the Mayan underworld.

Described as “For fans of Katherine Arden, Naomi Novik and Helene Wecker” – definitely agree! It feels like a mix of The Golem & The Djinn crossed with American Gods; it’s a Mexican-inspired road trip, if your idea of a good road trip is alongside a God of Death, picking up chopped-off fingers & odd magic at random points, and bumping into your crass, oblivious cousin at every stop. I love the way that Cassandra’s character develops – and how she goes from accidental rescuer to an actual player, with her confidence growing as she does so.

A beautifully-written and enchanting story with a wonderful dose of magic and culture.

The Galaxy, And The Ground Within by Becky Chambers 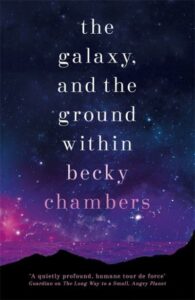 When a freak technological failure halts traffic to and from the planet Gora, three strangers are thrown together unexpectedly, with seemingly nothing to do but wait. Pei is a cargo runner at a personal crossroads, torn between her duty to her people, and her duty to herself. Roveg is an exiled artist, with a deeply urgent, and longed for, family appointment to keep. Speaker has never been far from her twin but now must endure the unendurable: separation.

Under the care of Ouloo, an enterprising alien, and Tupo, her occasionally helpful child, the trio are compelled to confront where they’ve been, where they might go, and what they might be to one another.

Together they will discover that even in the vastness of space, they’re not alone.

The final, fourth book in the Wayfarers series, which started with A Long Way To A Small, Angry Planet and continued with A Closed And Common Orbit. I didn’t really get into the third book, Record Of A Spaceborn Few, and I admit that I nearly didn’t pick this one up… but I’m so glad that I did!

It’s adorable. It’s got the charm and wonderful characters and odd encounters and thoughtfulness of the first, coupled with the wonderful mix of cultures and tense situations of the second. It’s sprinkled with things that make you think, and reflect, and we get to follow Pei again!! Wheee! Plus a few other odd ends are wrapped up, which is lovely – and some new ones introduced, which is also lovely, because things don’t just get resolved into nice neat bundles.

If you liked the first ones – or you like character-driven fiction where nothing really happens (which is THE POINT, Mister Smart-Ass Critic) – then you will love this one. It can be read as a stand-alone, too, so if you aren’t sure – try it and see! 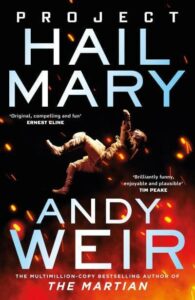 Ryland Grace is the sole survivor on a desperate, last-chance mission – and if he fails, humanity and the earth itself will perish.

Except that right now, he doesn’t know that. He can’t even remember his own name, let alone the nature of his assignment or how to complete it.

All he knows is that he’s been asleep for a very, very long time. And he’s just been awakened to find himself millions of miles from home, with nothing but two corpses for company.

His crew mates dead, his memories fuzzily returning, he realises that an impossible task now confronts him. Alone on this tiny ship that’s been cobbled together by every government and space agency on the planet and hurled into the depths of space, it’s up to him to conquer an extinction-level threat to our species.

And thanks to an unexpected ally, he just might have a chance.

Straight off: I loved The Martian (both book and film.) I admit I didn’t get on with Artemis – the setting was pretty cool, but Jax just felt… off, and I put it down after two chapters. And while Project Hail Mary is definitely, thankfully, trending more towards the awesomeness of The Martian, it’s still… well, not as good. It’s a good story, yes. A good read. But… eh.

A friend put into words how I was feeling: “With The Martian, you always felt like he could die at any time. With this, there’s lots of danger, but he’s not in any danger.”

There’s also a butt-load of science info-dumps, and it often feels like they’re in there more for the sheer desire to put a cool science info-dump in than because we actually need to know. Again, The Martian… but he was actually using the science in the course of the work, and using it as a tool. This feels more like science because I MUST EXPLAIN THE SCIENCE.

But it’s a good read. It’s fun, and chaotic, and I really liked the current-problem-then-flashback structure and the way things unfold. It’s a very well-told story, and I really like the unexpected travelling companion that turns up – very cute, if a heap of rock can be described as cute?

In short: worth a read if you like Very Danger Space Mission and scientific info-dumps.