The Art of Space Travel by Nina Allan 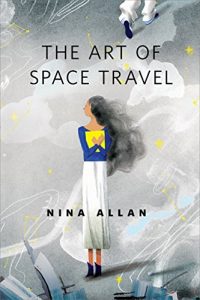 In 2047, a first manned mission to Mars ended in tragedy. Thirty years later, a second expedition is preparing to launch. As housekeeper of the hotel where two of the astronauts will give their final press statements, Emily finds the mission intruding upon her thoughts more and more. Emily’s mother, Moolie, has a message to give her, but Moolie’s memories are fading. As the astronauts’ visit draws closer, the unearthing of a more personal history is about to alter Emily’s world forever.

This is a novelette, so somewhere between a short story and a novel; short enough to read on your commute, but long enough to be a winding story!

I’m not entirely sure what I expected from this, but it wasn’t what I got, and it did leave me faintly disappointed. It’s more literary than sci-fi, despite the name; the story is Emily’s relationship with her mother whose memories are fading, with her boss who keeps an eye out for her in the job she never thought she’d stay in, with her own dreams and desires to find out who she is. It’s framed by the failure of the manned mission to Mars and the arrival of the astronauts, by Emily’s love of space, but the story only lightly touches on any of the details. It’s almost got a misted, floating quality; a short tale that drifts along, winding into a sweet conclusion, but one that is very much of this world.

The Red Threads of Fortune by Jy Yang 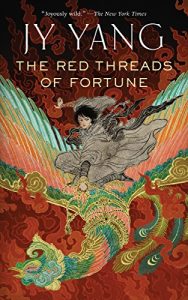 Fallen prophet, master of the elements, and daughter of the supreme Protector, Sanao Mokoya has abandoned the life that once bound her. Once her visions shaped the lives of citizens across the land, but no matter what tragedy Mokoya foresaw, she could never reshape the future. Broken by the loss of her young daughter, she now hunts deadly, sky-obscuring naga in the harsh outer reaches of the kingdom with packs of dinosaurs at her side, far from everything she used to love.

On the trail of a massive naga that threatens the rebellious mining city of Bataanar, Mokoya meets the mysterious and alluring Rider. But all is not as it seems: the beast they both hunt harbors a secret that could ignite war throughout the Protectorate. As she is drawn into a conspiracy of magic and betrayal, Mokoya must come to terms with her extraordinary and dangerous gifts, or risk losing the little she has left to hold dear.

The world in this is fantastic – detailed, rich and strange. The plot’s as twisted; while the action is fairly straight-forward, every encounter and relationship is filled with just enough hints and snippets that you can feel the weight of the past and the backgrounds, without it intruding. And the characters are brilliant; complex, passionate, thoughtful, impulsive, bitter…

It’s an odd read; while it is action-packed, I somehow found that the first half did drift, and it’s not one that kept my interest beyond a chapter at a time. However, once Rider appears, it speeds up – and the ending is really good. The writing is lovely, too, and I really enjoyed some of the imagery; the book is somehow very easy to read and enchanting at the same time.

The simultaneous sequel is The Black Tides of Heaven, which I haven’t read yet….it’s on my list! 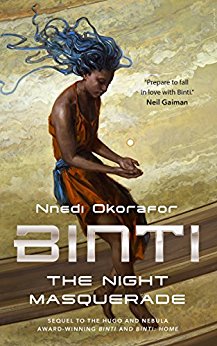 The third in the Binti trilogy of novellas – I absolutely loved the first, tore through the second and didn’t want to have to wait for the third, but it’s now out!

Binti has returned to her home planet, believing that the violence of the Meduse has been left behind. Unfortunately, although her people are peaceful on the whole, the same cannot be said for the Khoush, who fan the flames of their ancient rivalry with the Meduse.

Far from her village when the conflicts start, Binti hurries home, but anger and resentment has already claimed the lives of many close to her.

Once again it is up to Binti, and her intriguing new friend Mwinyi, to intervene–though the elders of her people do not entirely trust her motives–and try to prevent a war that could wipe out her people, once and for all.

I can’t really do a long review without spoilers, so I’ll just say that this is a lovely – and unexpected – conclusion. It winds all the existing threads together and tells a new story. The language is beautiful, the mix and changeability of characters is amazing, and I love how Binti changes and reacts to every new event. It’san excellent end to the trilogy, and if you haven’t read the first, absolutely read it!