I has done some reading! Books books books…

A Wizard’s Guide to Defensive Baking by T Kingfisher 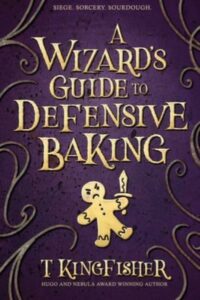 Fourteen-year-old Mona isn’t like the wizards charged with defending the city. She can’t control lightning or speak to water. Her familiar is a sourdough starter and her magic only works on bread. She has a comfortable life in her aunt’s bakery making gingerbread men dance.

But Mona’s life is turned upside down when she finds a dead body on the bakery floor. An assassin is stalking the streets of Mona’s city, preying on magic folk, and it appears that Mona is his next target. And in an embattled city suddenly bereft of wizards, the assassin may be the least of Mona’s worries…

This is, quite frankly, adorable. (Even with the slightly homicidal sourdough included.) The story follows Mona as she slowly realises her nice life is getting a bit more dangerous – being a wizard, even one who is only good with bread, is apparently liable to get you mysteriously vanished… and then when a body turns up in the bakery, it makes it a bit more real. Like, the-city-is-in-danger-and-the-adults-aren’t-doing-anything real.

It’s a cute, funny, witty coming-of-age mixed with a mystery, and it’s got a lovely, varied mix of characters. Mona is stubborn and practical, but it’s really interesting to see how she handles everything; and the adults around her are a wonderful slice of characters. The baking monstrosities are brilliant, too, and it’s a delight to see how much baking gets woven into the story. Funny, cute, and a delightful read.

The Space Between Worlds by Micaiah Johnson 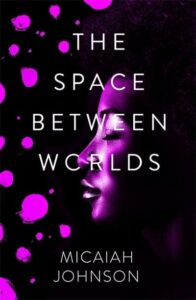 ‘My mother used to say I was born reaching, which is true. She also used to say it would get me killed, which it hasn’t. Not yet, anyway.’

Born in the dirt of the wasteland, Cara has fought her entire life just to survive. Now she has done the impossible, and landed herself a comfortable life on the lower levels of the wealthy and walled-off Wiley City. So long as she can keep her head down and avoid trouble, she’s on a sure path to citizenship and security – on this world, at least.

Of the 380 realities that have been unlocked, Cara is dead in all but 8.

Cara’s parallel selves are exceptionally good at dying – from disease, turf wars, or vendettas they couldn’t outrun – which makes Cara wary, and valuable. Because while multiverse travel is possible, no one can visit a world in which their counterpart is still alive. And no one has fewer counterparts than Cara.

But then one of her eight doppelgängers dies under mysterious circumstances, and Cara is plunged into a new world with an old secret. What she discovers will connect her past and future in ways she never could have imagined – and reveal her own role in a plot that endangers not just her earth, but the entire multiverse.

I didn’t know what to expect from this one, and it absolutely blew me away. The story follows Cara as she hops from world to parallel world, avoiding meeting people (and then meeting them anyway), downloading data, and then going home to flirt with her unavailable boss and live a life she never thought she had.

But where the first couple of chapters catch you, there’s then a twist. A reveal. And another. And another. And it’s absolutely fantastic – every piece of information adds up, every twist adds another layer, and it all builds so wonderfully on Cara’s character and choices that the pages just turn themselves. Cara’s character, too, is so layered – a woman overcoming an abusive past and trying to find her place between two cultures, but also endlessly thrown into other variations of those cultures; always having to adapt and reach, and always having to keep fighting. And the final twists at the end are brilliant – they tie everything together and round off the story so well.

Absolutely worth a read. 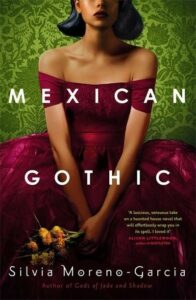 He is trying to poison me. You must come for me, Noemì. You have to save me.

When glamorous socialite Noemì Taboada receives a frantic letter from her newlywed cousin begging to be rescued from a mysterious doom, it’s clear something is desperately amiss. Catalina has always had a flair for the dramatic, but her claims that her husband is poisoning her and her visions of restless ghosts seem remarkable, even for her.

Noemì’s more suited to cocktail parties than amateur sleuthing, but she heads immediately to High Place, a remote mansion in the Mexican countryside, determined to discover what is so affecting her cousin. She’s tough and smart, with an indomitable will, and she is not afraid: not of her cousin’s new husband, who is both menacing and alluring; not of his father, the ancient patriarch who is fascinated by Noemì; and not of the house itself, which begins to invade Noemi’s dreams with visions of blood and doom.

Her only ally in this inhospitable abode is the family’s youngest son. Shy and gentle, he wants to help – but he might also be hiding dark knowledge of his family’s past. For there are many secrets behind the walls of High Place. The family’s once colossal wealth and faded mining empire kept them from prying eyes, but as Noemì digs deeper she unearths stories of violence and madness.

And Noemì, mesmerised by the terrifying yet seductive world of High Place, may soon find it impossible to leave this enigmatic house behind . . .

Did I really forget to review this when I read it?! It was a couple of months back… long story short, I enjoyed it! Horror isn’t usually my thing but I will make an exception for well-written gothics, and this definitely ticked all of the boxes. (I also read another one last year that I will be yelling about whenever it finally comes out…)

The story starts off light, witty, with an undertone of unease – it’s a weird house, weird situation, weird people, and Noemì surfs over it all with ease – until it starts getting under her skin. Weird dreams, weird noises, and more mysteries… The book’s descent into proper gothic horror is fantastically done, and the characters are what make it; creepy, eerie and excellent. Well worth a read.