A selection of shorts and randoms!

In The House of Aryaman, A Lonely Signal Burns by Elizabeth Bear 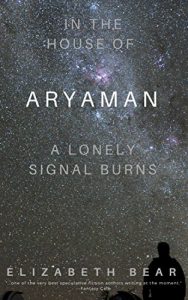 A man has been turned inside-out.

Fifty years in the future, in the sleek modern city of Bangalore, a scientist working on revolutionary bioengineering techniques has been discovered inside his own locked home, his body converted into a neat toroidal package of meat. It’s up to Police Sub-Inspector Ferron to unearth the victim’s complicated past and solve the crime, despite the best efforts of the mastermind behind the murder, aliens beaming signals from the Andromeda Galaxy, her overbearing mother, and an adorable parrot-cat who is the only witness.

This is a mix of detective fiction mixed with weird sci-fi, and it works very well! It’s unusual, readable and a good mix between characters, mystery and the somewhat strange (and cute!) world. Ferron has to discover who would want to murder the victim, how they were murdered, and how the brand-new parrot-cat that the victim owned is actually a much-loved pet… the first in a series, and the next is definitely on my list!

Made to Kill by Adam Christopher 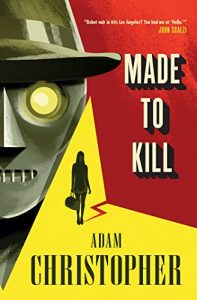 When a familiar-looking woman arrives at the Los Angeles offices of Raymond Electromatic – PI turned hit man and the world’s last robot – he takes on the case of a missing movie star, and is soon plunged into a glittering world of 1960s Hollywood: fame, fortune, and secrecy. But when he uncovers a sinister plot that goes much deeper than the silver screen, this robot is in the wrong place, at the wrong time.

This has a very noir feel; it’s a detective mystery set in Hollywood, featuring a robot detective with a 2-hour memory, and who also is a hitman in his spare time…

Which sounds like a really cool concept, and it was actually the third one in the series that flagged this series to me; however, I just could not get into this. I read the first 5-6 chapters and found myself not going back to it when I had the chance to read, so I skimmed ahead and it still didn’t grab me. I think it’s a mix of the mystery not being particularly grabbing immediately (as we know pretty much nothing about any of the characters) and the two main characters not hooking me. It’s well-written enough, and for fans of the noir and mystery genres, it might be perfect – but it’s just not my genre/feel.

The Song of Achilles by Madeline Miller 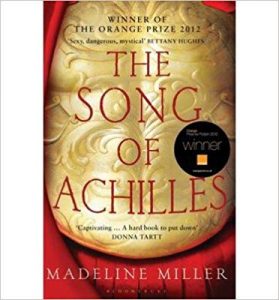 Greece in the age of heroes. Patroclus, an awkward young prince, has been exiled to the court of King Peleus and his perfect son Achilles. Despite their differences, the boys develop a tender friendship, a bond which blossoms into something deeper as they grow into young men.

But when Helen of Sparta is kidnapped, Achilles is dispatched to distant Troy to fulfil his destiny. Torn between love and fear for his friend, Patroclus follows, little knowing that the years that follow will test everything they hold dear.

I have to hold my hands up and say that, unusually, it was actually the story that meant I couldn’t get into this one…and not for the usual reasons! The writing’s lovely, and I can entirely see why it’s made the friend who leant it to me rave. But…I know the story, and I just couldn’t get into it. I know the tugs, the twists, the ending – and while I liked the new aspects of the characters that Miller’s brought to the story, it wasn’t enough to make me want to re-read the Iliad again. So, good, but not for this classics student! 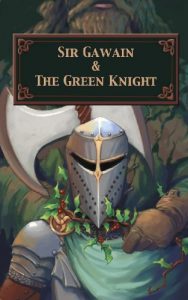 I picked the 1903 Charlton Miner Lewis version, which has been translated into modern verse, and…it’s ok. I’ll probably pick up another one or two of the versions, as some of the English is a little clunky and I want to get a range of ideas of the text (having said that, I’m not even going to try to read the original!) – I want to try the Simon Armitage version, I think.