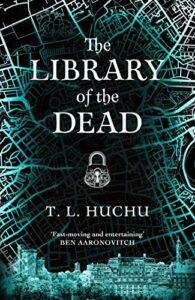 A couple of quick recommendations; I can highly recommend The House in the Cerulean Sea by TJ Klune for a cute found-family story, and The Library of the Dead by T.L.Huchu is great fun – a mix of Zimbabwe and Scottish culture & magic, plus finding your place, plus a really freaky library and talking to the dead and a bunch of mystery & danger. I loved it.

I had a DNF, too; I have read half of Nophek Gloss, but the protagonist is SO WHINY! It can’t just be me on that one, right? 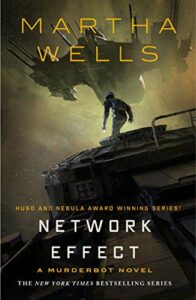 I’m usually alone in my head, and that’s where 90 plus percent of my problems are.

When Murderbot’s human associates (not friends, never friends) are captured and another not-friend from its past requires urgent assistance, Murderbot must choose between inertia and drastic action.

Drastic action it is, then.

The first full-length novel in The Murderbot Diaries; I read All Systems Red and loved it, and have been working my way through the rest!

I’m not sure if it’s my reading slump (slowly getting better, as evidenced by this post, but still going slow) or the book itself, but I wasn’t quite as into this as I have been with the previous novellas. It’s a good length, and works as a novel; there’s enough plot and action going on to fill it out nicely, and it’s all interspersed with snark, ART being an Asshole, Murderbot having to Interact With People, and a nice dose of Feelings – which is quite sweet. It’s a good, snarky, action-packed read, but I do wonder if the novella format works better? I’m definitely going to pick up the next anyway – Fugitive Telemetry, due out at the end of April!

Anyway, if you haven’t read Murderbot, or have a lot of sympathy for someone that just wants to be left alone to watch their shows and not have humans keep bothering them – then start on All Systems Red. And if you like Murderbot already, then this is an excellent continuation of the series. 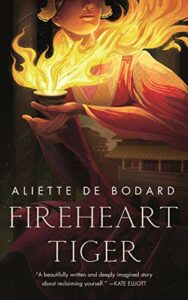 Fire burns bright and has a long memory….

Quiet, thoughtful princess Thanh was sent away as a hostage to the powerful faraway country of Ephteria as a child. Now she’s returned to her mother’s imperial court, haunted not only by memories of her first romance, but by worrying magical echoes of a fire that devastated Ephteria’s royal palace.

Thanh’s new role as a diplomat places her once again in the path of her first love, the powerful and magnetic Eldris of Ephteria, who knows exactly what she wants: romance from Thanh and much more from Thanh’s home. Eldris won’t take no for an answer, on either front. But the fire that burned down one palace is tempting Thanh with the possibility of making her own dangerous decisions.

Can Thanh find the freedom to shape her country’s fate—and her own?

I would have liked this to be longer (a common wail when reading novellas, I’m sure!); it was a beautifully wrapped up story, but… wasn’t enough.

The characters are sweet (or sharp, or naive, or so bound up in duty that they’ve forgotten how to feel) but it didn’t feel like I had long to appreciate Thanh; I would have liked to spend longer inside her head and as she adjusted back into a political role. And, of course, I’d like to know what happens next… it does very much feel like the start of a story, not one that can really be encapsulated into such a short text. But it’s beautiful, and very sweet, and very easily tugs at a whole range of emotions – credit to Aliette’s haunting writing! Worth a read, but I’d like more. 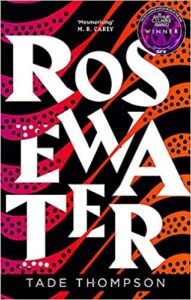 Rosewater is a town on the edge. A community formed around the edges of a mysterious alien biodome, its residents comprise the hopeful, the hungry and the helpless – people eager for a glimpse inside the dome or a taste of its rumoured healing powers.

Kaaro is a government agent with a criminal past. He has seen inside the biodome, and doesn’t care to again – but when something begins killing off others like himself, Kaaro must defy his masters to search for an answer, facing his dark history and coming to a realisation about a horrifying future.

I think that, in a book full of interesting and readable things, my absolute favouritest one was a love interest who only occasionally interacts with the protagonist. She’s got her own life. Her own career. Her own secrets. And we don’t hear about most of them!! It’s such a refreshing change to not have a romance that absolutely entangles two people; and for one of the surprises to come at the end, and never get explored. (I mean, there’s plenty else going on so we don’t feel its lack, but it’s so nice.)

The rest of the novel is excellent – a blend of strange and normal, the boredom of having to go to work sitting alongside miracles and mental projections. I loved the sheer normality of everything, woven through with the strangeness that both Rosewater and Kaaro’s talent create; even those with the power to read minds and find anything have to go to work and do the daily grind!

The protagonist, Kaaro, definitely has enough going on to fill the book. The novel alternates between Then and Now, exploring Kaaro’s life, his relationship to the strange dome that Rosewater has grown up around, his current work, his indifference and relationship with his bosses… and as the story goes, we get more and more information as secrets are teased out, and everything slowly becomes more interlinked. The tangle of the ending is excellently done; nothing is clean and simple, nothing is settled, but everything has been pushed onto a new enough path that humanity can keep on trundling along in the day job.

I’m not sure if I’ll pick up the next one, although I’ve been recommended the entire trilogy, as well as just the first one; there are hanging questions, but nothing immediately biting. But it’s an excellent, thoughtful, action- and culture-packed novel with enough science fiction to make us question exactly what humanity is made of.

Children of Ruin by Adrian Tchaikovsky 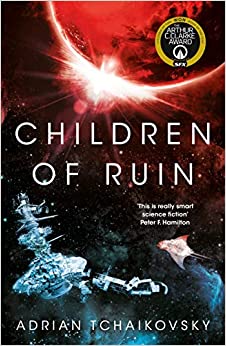 [Spoilers for Children of Time – this is the last review in this blog post, so don’t continue reading if you think you might pick that up!]

It has been waiting through the ages. Now it’s time . . .

Thousands of years ago, Earth’s terraforming program took to the stars. On the world they called Nod, scientists discovered alien life – but it was their mission to overwrite it with the memory of Earth. Then humanity’s great empire fell, and the program’s decisions were lost to time.

But those ancient terraformers woke something on Nod better left undisturbed.

And it’s been waiting for them.

I loved Children of Time (that ending!! I had to read the book in stages, but it is so worth it – although don’t pick it up if you don’t like spiders) and this is an excellent sequel. It continues the format of older terraformers interspersed with the slow growth of a new species – in this case, adorable, curious octopodes – and then the result when the search party of Humanity and Portii arrive. Having a similar format to Children of Time works well, with a new cast – particularly with the unique way of thinking and philosophy of the octopodes (my philosophy is “if you’re going to mangle language, go all-out”) – and it’s really fun to see how humanity and the spider civilisation react when they come across the new world. Plus, of course, the danger of Nod… I love the Biblical names, and it’s a really well-woven sense of danger that pervades the book. The ending is a satisfying one, too; it doesn’t seem like there’s anything more planned in this universe, but it’s definitely a very interesting and thought-provoking duo of novels. Definitely recommended.