Another month… or two? Aren’t we still in March? (The weather currently is definitely March weather.) Still here, still going. What’s been going on in the past month or so?

Baking: Key Lime Pie and Pumpkin Pie, along with natas. The natas sort of exploded, but they still taste good! We’ve also been making lots of soups – borscht, leek&potato, tomato (with extra kale, yay… gotta use it up somehow!) and Otter has been learning how to make risotto. Working from home has been really good for eating more interesting meals! 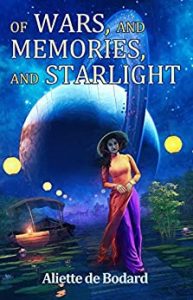 Reading: A Memory Called Empire (LOVE!! – politics and Aztec empire and poetry and language and imperialism and colonialism and characters and such a good story), Aliette de Bodard’s short story collection Of Wars, And Memories, And Starlight (LOVE!! Every story is a different snippet of culture and feelings and they’re all brilliant), and I’ve just started Apocalypse Nyx by Kameron Hurley.

Sewing: I have picked up one of my Ghibli canvases again – I did a Totoro, and started one of Howl and Sophie – and have been enjoying the mindlessness of filling in space with colour. It’s quite theraputic.

Watching: Up On Poppy Hill. It’s very sweet, but also a bit weird? Like… it’s sort of half a story with another half jammed on, and it all got a bit confusing… I dunno. The visuals are the star, as always in Ghibli, and I do always feel the stories are a bit odd. I’m not sure if it’s a re-watch or not.

Listening to: Cat yowls (his FOOD BOWL IS EMPTY) and compilations from AlexRainBird Music on YouTube.

Buying: Lost Stock! You can get a random (with some customisation) selection of clothes from brands that have cancelled their orders due to Covid – and it helps factory workers. It’s been really fun as well – I’ve gotten two boxes now, and out of eight items, I’ve kept five – and two of those were things I would never have picked up in a store/charity shop, yet they work really well! It’s been fun to push my style a bit, and get new clothes when I can’t get to charity shops.

I’ve also been sorting Christmas presents, which has been great fun (and given me something to focus on!) – and we can start decorating soon! We have no idea what Bobble is going to make of a Christmas tree – hopefully he’s old enough that trying to kill baubles has lost its charm. 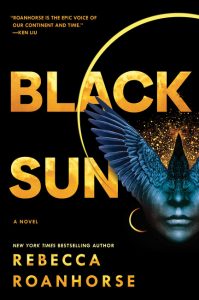 Work: ALL THE AMAZING BOOKS. Personal recommendations: One Day All This Will Be Yours (which features an excellent and very informative analysis of the relative running speeds of Hitlers (plural) and Allosaurus), Northern Wrath (Vikings! Mythology! Adventure! And a cute fox) and my eternal favourite Grave Secrets, because who doesn’t want a zombie as a best friend?

We also have the UK release of Black Sun – whee! I haven’t read it yet but it’s next on my list, and I am so excited! I also got to read The Witness for the Dead, which is the sequel to The Goblin Emperor, and… just yes.

Playing: Townscaper, which is a very cute build-your-own-city thing that doesn’t have a game, but is just absolutely adorable; and Dungeon Cards, which also has a phone app, and is really good when I just need to not think!

And me… I’m not great, really. I’ve upped my medication again to deal with work burn-out: hopefully the New Year will bring some changes on that front, but for the last year it’s been “just keep holding on, one more month” and I have just run out of fucks to give – which sucks, really, because I want to care, but… urgh. [Edited to add: having been thinking about this, I don’t think “care” is the right word – I do still care about all of my work! I just can’t summon the enthusiasm I know I should have for amazing books, which frankly sucks. I’m still doing the work, but it’s just that everything is a slog – when at least some of it should be fun? Depression, eh.]

I’ve got more energy thanks to the meds (Sertraline) but it’s at the cost of a slightly fuzzy brain and a disconnect to everything. My memory still isn’t great (and likely never will be), I’m tired all the time despite sleeping a lot, and I’m still just grey.

I’ve been doing a CBT course, which went as well as expected, but I feel I have to do it to be able to get any further help. I’ve now been given a worksheet on “values” because I’m obviously not doing enough nice things that tie into my core values, and that’s why I’m not feeling very good. I know all the mental health stuff is trying to help, but I really hate the underlying message of “you’re feeling bad because you aren’t helping yourself enough! Work harder! Do better things!” /rant.

But! I am trying to hold onto the good, small things. I curl on the sofa in the morning with my mug of green tea, watching the dawn out of the window with a cat on my lap. I have been playing Carcassonne with Otter, and texting Sam interesting facts about Roman mosaics. (He has been sending back pictures of his Hallowe’en skeleton, who is currently installed on the couch. I figure it’s as good a place as any.) I am cycling to work down a bumpy path criss-crossed with roots, between drifts of golden-fire leaves and grey water, with the cows ambling their way across the meadow beside me. I am planning a visit to the Ashmoleon with my family in the Spring, and taking pride in the new paint and floor in the bathroom. I am trying to keep stepping forward, one thing at a time, and taking the light where I can. 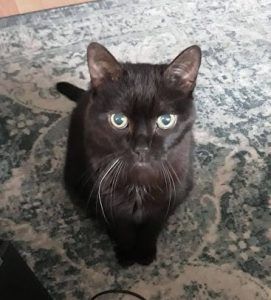 Right now it doesn’t feel like anything matters, but I am hoarding the moments for the time when I will be able to appreciate them.

Also, does anyone else’s cat like their fur being ruffled backwards?! Every other cat I’ve known would have clawed your face off if you even tried to ruffle their carefully-smoothed coat, but Bobble loves it! He’s such a strange kitty.

(The photo is when I was three minutes late in giving him breakfast. HOW VERY DARE I.)