A selection of short stories, anthologies and novellas wot I has been reading recently. 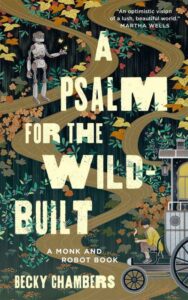 It’s been centuries since the robots of Panga gained self-awareness and laid down their tools; centuries since they wandered, en masse, into the wilderness, never to be seen again; centuries since they faded into myth and urban legend. One day, the life of a tea monk is upended by the arrival of a robot, there to honour the old promise of checking in. The robot cannot go back until the question of ‘what do people need?’ is answered. But the answer to that question depends on who you ask, and how. They’re going to need to ask it a lot.

The first in what sounds like a new series of novellas, set in an Earth where the robots gained consciousness and – left us, heading out into the wilderness. The world left behind sounds adorable, actually – craftspeople and families, and tea-monks who travel around with their kettles & cups & blends, offering a cup of tea and listening ear to anyone who needs one. (I definitely want a little pedal-powered caravan to travel in, even if it does end up hung with a whole variety of drying herbs and stuffed to the gills with tea blends.) But then the tea monk decides to go off the beaten track, and meets a robot, coming to check on humanity…

There’s a lot of talk in the novella; a lot of philosophical musing, and explanations of misunderstandings, and dialogue between two cultures that have diverged, but want to learn. It’s very sweet and very cute, and it’s going to be interesting to see where the next one goes! 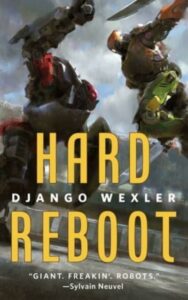 Kas is a junior academic on a research mission to old Earth. When a con-artist tricks her into wagering a huge sum of money she doesn’t have on the outcome of a manned robot arena battle she becomes drawn into the seedy underworld of old Earth politics and state-sponsored battledroid prize fights.

I really enjoyed this! It sounds like it was originally going to be a short story, but I’m glad he expanded it into a novella. I loved the characters, the mix of cultural backgrounds, the misunderstandings, the GIANT ROBOT FIGHTS – and it’s wrapped up in a cute romance. Who could want more?

Beyond the Dragon Gate by Yoon Ha Lee 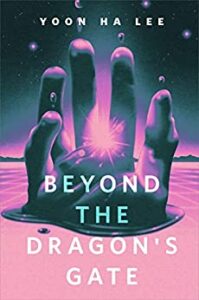 Former Academician Anna Kim’s research into AI cost her everything. Now, years later, the military has need of her expertise in order to prevent the destruction of their AI-powered fleet.

This is a novella from Yoon Ha Lee, author of Ninefox Gambit and Phoenix Extravagant (and, disclaimer, a Rebellion author.) I loved Ninefox – once I got past the “what the hell is happening” feeling of the first three chapters – and also enjoyed Phoenix, so I picked this up on a “let’s give it a try!”

It was… ok. It feels like a proof-of-concept, almost; a short story that’s somehow novella length, and I really wanted more to happen, or to see more of the world, or… well, just something more. So – a good short, but not really worth the read. 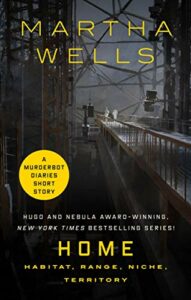 Set just after Exit Strategy, the fourth novella in the series. It’s a cute, short story from the perspective of Dr. Mensah, who is one of the key players in the first novella (and now someone who is… well, isn’t exactly friends with Murderbot, because Murderbot doesn’t have friends: friends involve Feelings and having to pause the latest downloaded drama) and who is currently trying to sort out her emotions around the events of the first few novellas. Murderbot is assisting by asking for assorted ridiculous weaponry, which… actually seems like quite a good coping mechanism! Cute and sweet, but very short, and definitely only to be read in the context of the series. 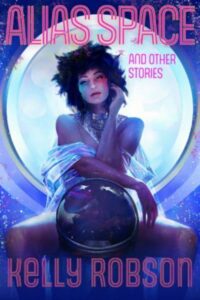 This is a lovely, varied collection of speculative fiction short stories by award-winning writer Kelly Robson – and the collection has the added bonus of a short passage by Robson after each story, giving more background on the story and adding interesting context to each. The stories range from sci-fi to horror to historical fiction to fantasy, and all have an interesting thread to them; there’s certainly nothing here that’s boring!

The collection starts with Two-Year Man, a world where those allowed to fight for longer are the higher-ranking (hence two-year man; a lowly janitor). But the titular janitor cleans a genetics lab, and finds unwanted babies in the trash – those thrown out because they’re wrong, or broken, or defective – and he takes them home. Intervention, later in the anthology, also deals with the theme of children – the lovely idea of childminding taken up by those who really want to, and how a creche would work with worlds spread across the solar system. How do you mix the latest child-minding science and psychology with the fact you’re raising new people, with all their foilibles and flaws? And what happens to a society that hates children, but then realises that they need them? I’d actually read this before as part of Jonathan Strahan’s Infinity’s End anthology, but it’s just as good the second (or third, or fifth) time around.

The titular story, Alias Space, is one of three loosely-connected stories. In the first, The Desperate Flesh, the manager of a retirement home for lesbians is trying to stop it being demolished by the city, but there’s the small issue of the residents’ penchant for strip tease… and in the second, Alias Space, strip tease dancers elbow themselves room in a city festival. The third, Skin City, puts a futuristic spin on the strip-tease concept; an artist breaks copyright law in an effort to get their forbidden love to talk to them! It’s a fun interlinked trio, all exploring different aspects of a common theme.

La Vitesse is the first of the fantasy stories: what if dragons started invading, and became a nuisance species? And if you’re a school bus driver, that means trying to figure out how to escape a fire-breathing terror that wants to rip your bus open… and that also means figuring out how to connect with your grumpy fourteen-year-old who’s definitely got her own opinions on how to drive a bus, and what good ice cream is. The other major fantasy story is a longer novelette, Waters of Versailles, and is set in eighteenth-century France; an inventor is enchanting the Court with new water closets, but the secret to how he does it is closely guarded – and his problems expand from how to keep his courtly patrons happy to how to keep the water-controlling nixie happy!

Plunging back into sci-fi is Two Watersheds, a scientist in VR exploring how invasive lichen can be managed while dealing with her own personal problems. A Study In Oils is probably my favourite in the book, and is a really interesting exploration of art, murder and intent; an athlete accused of murder (despite murder being semi-legal during a game…) goes to a remote village to try to escape people hurting him as a punishment; he loves creating art, and the story explores what art means to him, especially in the context of his actions and their own context of the game and society. The Three Resurrections of Jessica Churchill is also a very hard-hitting story about choices; a raped & murdered girl ends up being saved by an alien parasite, and has to explore the consequences of both of those. (Robson’s note on this story is particularly interesting as well!) And We Who Live In The Heart is another hard-hitting story that deals with choices and murder; humans have made habitats in huge, whale-like creatures… but they are still learning the biology, still learning how to live, and when you add human choices & relationships into the mix (and in particular, love and revenge) then it gets complicated – and interesting.

There are a number of mixed genre stories, too, which mix into the scifi. What Gentle Women Dare strays into historical fiction, with a street walker’s life, and her choice when she’s offered a devil’s bargain… So You Want To Be A Honeypot is a slightly-unfocused, very fun spy thriller, following a cohort of trainee spies as they take their first assignments and get used to life, and get used to being able to make their own choices. And the final story in the collection, A Human Stain, is a wonderful gothic horror: a governess comes to remote castle to look after a child, but there are many mysteries surrounding it… and she finds it is more terrifying – and beguiling – than she had thought…

A very mixed and very interesting collection, and well worth a read.