Random things that I have managed to read recently! 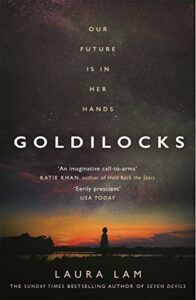 Despite increasing restrictions on the freedoms of women on Earth, Valerie Black is spearheading the first all-female mission to a planet in the Goldilocks Zone, where conditions are just right for human habitation. It’s humanity’s last hope for survival, and Naomi, Valerie’s surrogate daughter and the ship’s botanist, has been waiting her whole life for an opportunity like this – to step out of Valerie’s shadow and really make a difference. But when things start going wrong on the ship, Naomi starts to suspect that someone on board is concealing a terrible secret – and realises time for life on Earth may be running out faster than they feared . . .

This is what Do You Dream Of Terra-Two should have been. It’s an excellent, thoughtful and far-too-close-to-the-bone look at what the future could hold for space travel, once the Earth’s climate problems have got too big to ignore: a journey to a distant Goldilocks planet that could mean a wonderful new home for humankind. Unfortunately, it could also mean that humankind’s worst traits come too, with a side dose of unfortunate political thinking; like the relegation of women to childmaking and rearing, and their exclusion from everything else. When a team of five women astronauts steal a spaceship and set off for the new planet, they start to dream of a Utopia – only to find that someone may have been thinking steps ahead of them, and their plans to ensure that Humanity’s future is better than it was on Earth could have costs that they are not willing to pay. Goldilocks is a disturbing near-future story with rich, beautifully-drawn characters and a rather terrifying message of hope. 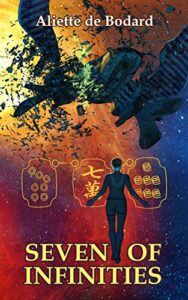 On a string of orbitals called the Scattered Pearls Belt lives Sunless Woods—sentient spaceship, master of disguise, and master thief who chafes against the obscurity that comes with her retirement. There, too, lives Vân, a poor scholar with little confidence but plenty of heart, and whose income comes from tutoring a wealthy student.

Their lives are turned upside down when Vân finds a corpse in her student’s quarters and Sunless Woods, intrigued by Vân’s sense of justice, offers her help. Scholar and spaceship must chase the mystery around the empire’s forgotten edge: from rundown teahouses to ascetic havens, and even in the wreck of a spaceship—and all the while, they begin to fall for each other in earnest. But the secrets they’ve kept from each other are large and devastating—will they and their love survive the revelations?

I absolutely love Aliette’s short stories, and particularly the Xuya universe – so a longer novella-length story was something I jumped at! However, I have to say that this is good, but not great. The universe is beautiful, and the scenery is rich and detailed as always; I love the tiny details and the way that the characters are tied into their backgrounds by the hundred little gestures, comments, words that they choose. The plot itself is interesting, and kept me pulled along. However, I think it was the relationship between Vân and Sunless Woods that didn’t ring quite right; I can’t put my finger on it, but I didn’t manage to buy into it, even though I wanted to. That said, it’s a lovely story, and worth a read if you like the other stories in the Xuya universe.

The Sword in the Street by CM Caplan 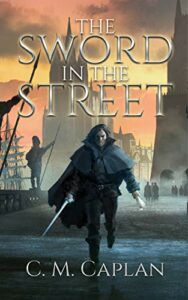 Trial by battle is a holy rite on Hillside. Hired blades bleed their foes in savage duels, settling everything from petty grievances to the corporate laws that keep their citizens in line. Embroiled in these cutthroat political games is John Chronicle, an impoverished swordsman with no better prospects, seeking the duel that will free him from the Dregs.

Meanwhile, John’s boyfriend Edwin, an autistic university student, befriends a fellow scholar who claims to study the arcane art of thaumaturgy. When she offers to teach Edwin this subtle magic, he hopes that he can use it to bolster John’s skill with a blade. But thaumaturgy is a dangerous magic, and the forces that drive it have other plans.

The couple soon find themselves entangled in the web of intrigue surrounding the swordsmen and their sponsors, and they’re forced to question how bloody they’re willing to get to escape poverty — and they don’t come away with the same answer.

This is one that I was lucky enough to read while formatting, and it’s adorable. If you want the full review quote: “Gritty and sweet… as much about the relationships as it is about the action. It’s a sword-filled story of desperation and hope, and a man fighting for his passion – and his love.” It’s always nice when I get a book for formatting that I really enjoy – and also bloody irritating, as I forget what I’m doing when I get too into reading… 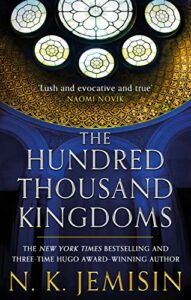 Yeine Darr is an outcast from the barbarian north. But when her mother dies under mysterious circumstances, she is summoned to the majestic city of Sky – a palace above the clouds where gods’ and mortals’ lives are intertwined.

There, to her shock, Yeine is named one of the potential heirs to the king. But the throne of the Hundred Thousand Kingdoms is not easily won, and Yeine is thrust into a vicious power struggle with a pair of cousins she never knew she had. As she fights for her life, she draws ever closer to the secrets of her mother’s death and her family’s bloody history.

But it’s not just mortals who have secrets worth hiding and Yeine will learn how perilous the world can be when love and hate – and gods and mortals – are bound inseparably.

This is the first in the Inheritance Trilogy, and I admit to being on the fence about picking up the next. I enjoyed the book; it’s a very good story of politics, centred around Yeine, stranger and “barbarian” to a new city, who is just trying to survive the power struggle between both herself and her cousins, and between the enslaved Gods and their human masters. Her plunge into the new world keeps pulling along right to the end, and I enjoyed reading – I suppose my reservations about picking up the next are more to do that I don’t feel I need to find out what happens next! It’s almost standalone enough, and the story and characters are richly drawn and compelling. Worth a read if you like epic fantasy and political intrigue.