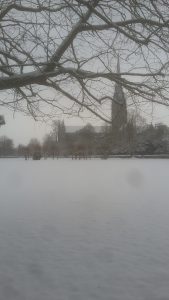 Where did February go? * blinks* Well, I’ve been doing ok this month, problem clients and minor anxiety notwithstanding. Things that have made me happy include…

1.The three anthologies that I have been editing – with co-editors, thankfully it’s not just been me! – have a launch date and a launch party planned! I’ll be in Oxford on the 8th June for those, and I’m really looking forward to sharing the stories. Despite having read them multiple times, I still think they’re fantastic, and one keeps making me cry every single frickin’ time I read it. I am evilly wondering how many other people it’s going to have the same effect on…

2.Snow! We got another coating mid-March, and I was lucky enough to get out for a walk early in the morning. The Cathedral was beautiful, and while the daffodils and birds were Not Happy, I quite enjoyed it. 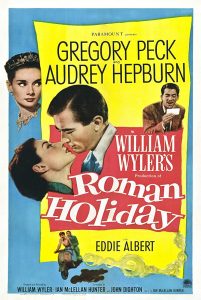 3.I’ve been re-watching Roman Holiday with Audrey Hepburn and Gregory Peck, and I’m always astonished by how quiet Rome is. There’s no people! No traffic! I love the film, too – I think I like it better than Breakfast At Tiffany’s, even though there is Slob Cat in that one.

4.A board game called “Honshu“, which I played with the Salisbury gamers. You have to build a city with cards, and it’s quite non-dramatic – but in a fun strategy way! I like the mix of tetris-style thinking and trying to get as many lakes as possible. We also played Seven Wonders this week, which was enjoyable – I like Sid Meier’s Civilisation games, and I liked the variety of ways Seven Wonders uses the resources.

5.Wonderful friends! I got an Easter parcel from a friend in Belgium, a lovely postcard with a sloth on it, a box of fun writer-y bits from the awesome Ellen Crosháin (who, by the way, has a new book up for pre-order – and it’s awesome. You should totally read Cruelty and then order the sequel) and various emails from my lovely aunt about birds, cake and snow. I’m incredibly grateful for the amazing people in my life 🙂