All of the happy things for June 2019! Except the weather. What happened to the sunshine?! (Well, apart from one brief day. It’s like it decided to remind everyone what we were missing…) 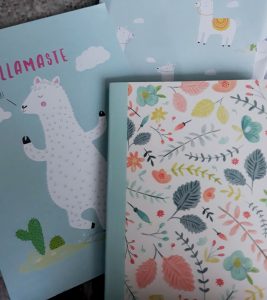 A lovely friend has sent me all the llamas! (And a nature-y notebook, which is lined and lovely.)

It’s actually the same friend who sent me the brooch; it’s a bit of an odd friendship, but so far, I think we’re making it work! It’s really nice to get cards in the post anyhow, and I’ve been sending them things too – and now this means I get to choose and send another ridiculous card! How does one improve on llamas? A sloth, maybe?

Not a happy thing per se; I had one of the worst panic attacks I’ve had for a while this month, set off by what should have been a small stress – but if nothing else, it did show me that I can cope with them! My partner was amazing too, which helped so much. It sucks to have one and I’m so frustrated that after so long of feeling ok, my brain is being dumb… but I know that I can cope.

3.I finished a story!

Actually, I’ve finished all the stories! I’ve uploaded the final installment of The Summer Knight on Wattpad, which means my Dresden Files writing is now done. It starts at The Envoy if you want some quick reading in an urban fantasy universe!

We built a thing! The fences in the garden had blown down a few months back in the bad storm, and I’d deconstructed them (well, the wind did most of it) and stacked the wood… and then had an idea to built a bike shelter out of them to keep the rain (and pigeon poop) off the bikes. So we spent a sunny Saturday out in the garden with a saw and a tape measure and various spiders and woodlice and a lot of screws, and we built a thing! It felt so good to be using those skills again, and to be able to look at something and go “yes, I see the problem, we need MOAR SCREWS” because over-engineering something is always the best solution.

Well, it was either that or duct tape.

And on a side note for a happy thing; being out in the garden. It’s lovely dappled shade and it was beautiful.

I blame Sean at work.