What’s going on this month? Stuff. Things. Swans being f***ers (seriously, those things are absolute gits!) A lot of walking around Oxford. Friends. Being tired. It’s been a pretty good month so far, even if I have been exhausted for some of it… so, best bits? 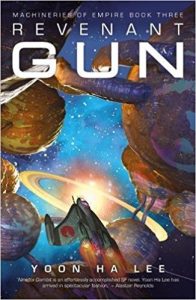 I love my job! (Ps. Yoon Ha Lee’s Revenant Gun is out this week! My colleague and I may have been fangirling over Ninefox fanart…)

I’m currently looking for a place of my own with a couple of friends (as I’m currently in a friend’s spare room) and it’s been fun to see bits of Oxford I might not otherwise have gone to! I’ve been doing a lot of walking, and it is adding to my anxiety levels (phone calls, timing issues, more phone calls…) but it’s exciting as well.

I miss my furball (despite the fact he regularly woke me up at 3am for breakfast when there was food in his bowl, and his favourite sleeping spot is obviously on whatever you’re currently trying to do…) so a potential new furball is great! We don’t know if it’ll actually come off, but it’s a nice dream. My housemate has been looking at cats…I’m currently trying to persuade him that kittens are adorable bundles of squeaky fluff, but they are also FUCKING HARD WORK.

4.It’s weird, but “coping mechanisms” have been a good thing!

I broke last week; I was completely exhausted, and had a couple of days where I really could have used my walking stick (and not just to hit people with…) but actually, I feel quite optimistic about it. There wasn’t a specific trigger so I don’t know exactly what I could have avoided to prevent it, but once I realised what was happening, it felt like a routine – I knew what I needed to do, I did it, and I looked after myself as best I could. I was still able to get into work, and even though I was tired, I didn’t burn myself out. So – it sucked, but actually, I got this. I can cope with it.

I used to eat them a lot in school and I’ve rediscovered them. My favourites are the orange and coffee, and I’ll reluctantly eat the raisins. I guess they’re better than Bertie Bott’s, at least – no vomit or dog poo!

So that’s halfway through June…now I’ve got several books to read, several things to edit, and general chaos to administer – so back to work!