I had a visit to London for a work thing, and while I was there I had a peanut butter & banana waffle and iced Vietnamese coffee at Black Sheep Coffee – it was amazing. I also got lunch at the Blue Fin building, which has a wonderful view!

I went to the Ashmolean and got to squeak about Romans with a friend, plus there was an acoustic guitarist in the basement lobby which resonated throughout the building! Some other friends and I went to an open mic night (not performing, no way!) and then got ice cream too, which was lovely.

I ended up down in Lymington, painting a wall (as you do) and got an accompaniment of a brass band and some pop tunes! 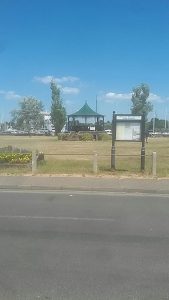 Annoying, but also lovely! I spent quite a few moments on various walks home just sitting by the river.

So, how about August?

Or singing, at least. We had the Rebellion Summer BBQ, which (despite a few nerves) was very fun: I got to chat to people, ate good food, and unexpectedly ended up singing sea shanties and Disney songs – and a rendition of Country Road! I still don’t sing in public very often, but it wasn’t alcohol-fuelled courage, so even though I’ve still got a lot of anxiety over my voice and singing I had fun and enjoyed it, damnit.

I got to watch a whole bunch of Buster Keaton films with a friend recently (future edit: Badger!), and we’ve got a stack more on the list, which is awesome.

It’s a very different experience to watch silent films (although obviously they have – and had – music, so it’s not exactly as described) and really interesting to find out some of the background and random trivia as my friend squeaked about it all. I watched some Chaplin films as a child, which I’d mostly forgotten about, so they’ve gone on the watching-next list (after the rest of the Keaton and a bunch of other silent ones like Metropolis) so I’m likely to get a lot more trivia to come! 😀

I had coffee with a friend recently, and they were talking about my job, and submissions, and writing…and damnit, I GAVE MY OPINION. I AM AN EDITOR AND I AM A GOOD EDITOR AND DAMNIT, I HAVE OPINIONS THAT ARE WORTH SOMETHING! And I now have all the things to read… but hey, if I can use my l33t editing skillz to help friends, then I will.

4. I MET THE MOST HANDSOME CAT

I’m randomly going to Amsterdam at the end of the month, off to Hadrian’s Wall this winter (I know, I’m crazy, but the place I’m staying has a log fire so if it’s horrible then I just catch up on my reading) and I’m thinking about trips to Japan, Ireland and New Zealand! It’s really amazing to be able to cope with thinking about it, and be excited about all the possibilities – I’m going to have to save up a stack of money (particularly for Japan…) but it’d be so good to do. I’ve wanted to for years, and realised that actually I CAN. So fuck it. I’m going to.

So that’s it for August so far…and I’ve got more chaos to come for the next two weeks, so it’s all fun!