I’m still getting whacked by anxiety (a combination of suddenly shifting sands on something I thought was more settled, a problem that’s rumbling onwards and I just want sorted, and my brain being an arse) – so I’m going to do happy things because they make me happy!

I’ve been learning bits of blues with my partner, and oh my goodness is it hard! I used to dance as a child – modern, ballet, tap – but learning to dance with someone else is so hard! That said…I’m getting better, and it’s so much fun. It’s taking me a little while to relax each time and we’re still struggling to put together a reliable playlist, but it’s really fun to do.

2.Ducks on the river

It’s my colleague asking, very seriously, “So how are your weasels today?” It’s one of my best friends sending chocolate, yaoi or a snippet of her latest writing. It’s spending an hour sitting in the V&A with someone I miss dearly and don’t see often enough, just catching up. It’s my gaming group asking how I am, even briefly, before we get into the serious business of trying to thwart the purchase of coffee and then ensure that the boat is full so it can’t be traded. It’s getting a coffee from a friend halfway across the world, a tweet from an old colleague in another city or a silly cat gif from a friend across the room. I am ever grateful to have such wonderful people in my life.

via GIPHY
So, we’ve got two methods of getting the cats to come – as, I suspect, have all cat owners. The first is a deliberate one; we use a whistle. It usually means they get a treat, so they do come…eventually.

The second is to open a packet that may, conceivably, possibly, contain cheese. However, as it’s Schrodinger’s Packet of Cheese, they have to be there at your feet to ensure that it does contain cheese until it is discovered that it does not, in fact, contain acceptable cheese.

(Unacceptable substitutes include lettuce, spinach, mozzerella, pasta, rice and cereal. Also unacceptable is not actually giving said cat any of said cheese once it has been ascertained that the packet does, in fact, contain acceptable cheese.)

Yowling of course makes the entire process go faster, and reminds the human that they are starving and never get fed and therefore that packet had better contain cheese!

Of course, if the packet doesn’t contain cheese, they never wanted any anyway and what do you mean they were yowling? No. Not us. We’re far too dignified to beg for cheese. 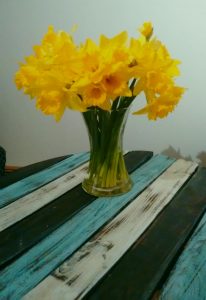 Snowdrops in the woodland, blossom on the tree outside my back door, and daffodils in a chipped mug. Spring’s coming!