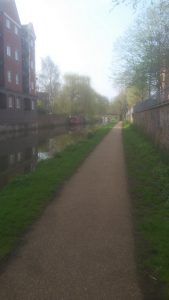 I’ve been walking to work down the canal for the past few days, and it’s been lovely – there was sunshine and ducks and blossom! It wasn’t quite so nice in the rain last week but there you go.

2. I survived my first week at work!

Everyone’s been lovely, I’ve found a board game posse, I got to copy-edit (aka. read) a couple of amazing books…I’m still learning everyone’s names (and will be for a while) but so far, it’s a really nice place to work, and I’m enjoying the job.

I haven’t been doing too well with eating (stress and new situations do tend to bring out the feeling sick/not eating results) but I made banana bread while at my aunt’s this weekend, and I’ve been making sure I buy things that I want to eat – resulting in tempura battered chicken with gucamole and cream cheese in a pitta for last night’s dinner. It’s glorious.

My Solaris/Abaddon stack has gone down a little (har har…it’s promptly had more put on it) and I’ve had confirmation that I’m at least at the right publishers, because I LOVED most of them! (Dredd is the current exception, because he’s a dick).

I’m actually doing ok at the moment, to my great surprise! I’ve been coping. I’ve been cheerful. I’m tired, sure, and I’ve had a few moments where I’ve wobbled – but it’s been a tiny one, a momentary pause and then I’m back on track again. I’ve been chatting to people and trundling along to games and doing freelance bits in the evenings, and doing scary things like going to new shops and going out with new people, and I’ve coped really well with a new environment at work and a new city. I’m cynically waiting for the crash (as this feels…weird) but it’s been nice to actually be able to cope. Is this what it’s like for people who don’t have wonky brain chemistry?! I think I’m still mostly running on adrenaline, honestly – I’m not sleeping brilliantly, so I’m fully expecting to crash sometime. But hey, I’m going to enjoy the smooth ride while I can before my brain decides to go back to normal.

So there’s April! I’m enjoying the spring blossoms, too, while they last. I hope that you’re enjoying the sunshine if you have it!

Ps. Don’t forget that you can pre-order Desert Sands & Silence, and that will make me even happier 🙂 Also, the first in the series – Green Sky & Sparks – is only £0.99 on Kindle at the moment!