Specifically – that moment when you come out of a story and don’t even realise you’ve been sucked so deep into it; when you’re looking around, blinking, wondering which world you’re in…

(Yes, I am trying to convince work to buy it!)

Otter and I went to a lecture at the National History Museum – which was good, if a little alien for me; microbiology is not my field! I already love the Ashmolean late nights, and have just started looking at what else I can do; I unfortunately missed a talk by Emily Wilson at Blackwells, but we have a couple of other events lined up already…

It’s also been great exploring Oxford itself – we took the cut-through next to the Lamb&Flag, which Otter hadn’t been through before. It’s great fun to find the little nook and crannies, or be introduced to the good places to sit above the High Street, or find where does the best milkshake (G&Ds, by the way). 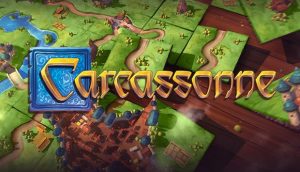 I’ve got the app for Android, and have been playing with my partner, and also with friends. It’s been fun to stretch my wings with it – for the past year it’s been an off-and-on game with the games group at work, and they’ve been playing for so long that they know all the tricks! But – they’re also incredibly supportive, if only in the name of helping you so that you can screw over another player…

And it’s very satisfying to see that translate into game knowledge when I’m teaching someone else, and also seeing them win!

Re. the app, I am mostly liking it; the graphics are nice, you can turn expansions on and off, and the interface shows moves and possibilities very nicely (eg. it shows your fields!) The major frustration is how slow the AI is. I’ve had points where I’ve been doing something else in addition to playing the game, which doesn’t make for a snappy session! But overall, mostly a positive experience.

4.”Hello, Murder Phone? Please hold, your furry black nightmare will be with you shortly.” 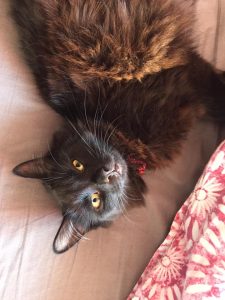 Ps. go check out the Campaign Trail podcast! The Campaign Trail is a Dungeons and Dragons podcast where the quest is to win a general election! Join our team of fantastical adventurers as they head to marginal constituencies and face puzzles, monsters, intrigue and maybe even a dungeon and a dragon. Exit polls. Sorcery. Economic policy. Ancient curses. It’s like no other D&D game you’ve ever heard.

5.There’s no such thing as too many books, just not enough shelf space 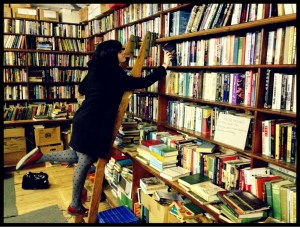 I mean, obviously more are needed, but it’s good to get the current books in for a start.

And I have had to reassure them several times that they don’t have too many books, just not enough shelves!

(Image unfortunately via Tumblr so I can’t find a source)